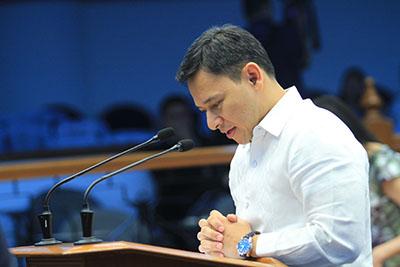 Reelectionist Senator Sonny Angara said the Philippine National Police should make it a priority to protect government critics, including the Catholic priests who came forward to reveal that they had been receiving death threats after criticizing President Duterte’s war on drugs.

“If anyone should be protected, it should be the critics of the government. This is to show that we are a democracy and we value freedom of speech and expression,” Angara said in an interview with CNN Philippines.

Angara was referring to Catholic priests Albert Alejo, Flavie Villanueva and Robert Reyes, who jointly revealed to the public that they had been receiving threatening SMS messages from still unidentified senders.

Angara said the death threats against the priests were a “cause for concern.”

During a press conference, the three priests suggested that Duterte could be behind the death threats directed at them.

To settle their differences, Angara is proposing a dialogue between the Church and the government.

“I think dialogue will always be welcome. It’s not really good to see our top institutions engaging in mudslinging,” Angara said. “That has been done before by other presidents, so why not?”

ANGARA: PGH AND EAST AVENUE MEDICAL CENTER RECEIVE ADDITIONAL FUNDING UNDER THE 2021 GAA TO SERVE MORE FILIPINOS IN NEED OF MEDICAL ATTENTION
PCMC receives additional support under the 2021 GAA to provide even better services for children in need of medical attention-- Angara
Statement of Sen. Sonny Angara on the signing of the 2021 GAA
Christmas message of Sen. Sonny Angara
Angara: Displaced workers will continue to receive assistance under the 2021 budget
Improved internet services even in far flung areas expected with the increase in the budget for the National Broadband Program-- Angara
Angara-- New and unfunded laws will receive funding under the 2021 GAA
Improved health responses needed to boost consumer confidence and spur economic growth -- Angara
Angara wants more public hospitals and medical professionals to ensure all Filipinos are provided with quality health care
Angara wants public libraries to provide essential services to learners under the new normal
Statement of Sen. Sonny Angara on the transmittal of the 2021 GAB by the House of Representatives
Angara bats for the naturalization of Angelo Kouame
Angara pushes for survivorship benefits for members of the National Prosecution Service
The President's report on the implementation of the Bayanihan 2
Angara calls for extension of waiver on fees for digital transactions of banks and mobile payment services
Angara to Comelec: Work on making it easier for seniors and PWDs to vote during elections
Angara: There should be no delays in the implementation of Bayanihan 2
Angara says 2022 deadline for registration of 90 million Filipinos to PhilSys ID should be achieved without delay
Angara to CHEd and SUCs: Let’s work together in keeping Filipino graduates in the Philippines
Statement of Sen. Sonny Angara  (law sponsor) on the enactment of Bayanihan 2
END_OF_DOCUMENT_TOKEN_TO_BE_REPLACED