ANGARA SAYS JAAFAR ‘A VOICE OF REASON, A VOICE FOR PEACE’ 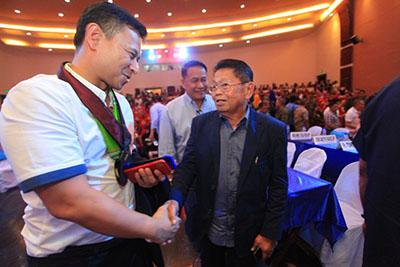 The 75-year-old Jaafar reportedly died at around 1 a.m. on Wednesday, three days after confinement in Metro Davao Medical and Research Center in Davao City due to heart problems.

“He was a voice of reason and a voice for peace and will surely be missed,” Angara said.

As chairman of the Senate Committee on Local Government, Angara co-sponsored the BOL under Republic Act 11054, which was overwhelmingly ratified by the Bangsamoro people during a two-part plebiscite held earlier this year.

“He (Jaafar) was highly determined to get the best deal for his constituents, but was also willing to be flexible on some points in order to come up with a new organic law for Muslim Mindanao,” the lawmaker said.

Jaafar was among the 76 members of the Bangsamoro Transition Authority (BTA) who took their oath of office in Malacañang last month. BTA will serve as the government of the BARMM from 2019 until the elections in 2022.

The BARMM is envisioned as a political entity that would realize the aspirations of the Bangsamoro people for genuine self-determination under a ministerial form of government and ensure autonomy far more than what the ARMM provided.

is seen as a solution to the problems that the ARMM failed to address, such as poverty and unstable peace and order situation.

ANGARA: PGH AND EAST AVENUE MEDICAL CENTER RECEIVE ADDITIONAL FUNDING UNDER THE 2021 GAA TO SERVE MORE FILIPINOS IN NEED OF MEDICAL ATTENTION
PCMC receives additional support under the 2021 GAA to provide even better services for children in need of medical attention-- Angara
Statement of Sen. Sonny Angara on the signing of the 2021 GAA
Christmas message of Sen. Sonny Angara
Angara: Displaced workers will continue to receive assistance under the 2021 budget
Improved internet services even in far flung areas expected with the increase in the budget for the National Broadband Program-- Angara
Angara-- New and unfunded laws will receive funding under the 2021 GAA
Improved health responses needed to boost consumer confidence and spur economic growth -- Angara
Angara wants more public hospitals and medical professionals to ensure all Filipinos are provided with quality health care
Angara wants public libraries to provide essential services to learners under the new normal
Statement of Sen. Sonny Angara on the transmittal of the 2021 GAB by the House of Representatives
Angara bats for the naturalization of Angelo Kouame
Angara pushes for survivorship benefits for members of the National Prosecution Service
The President's report on the implementation of the Bayanihan 2
Angara calls for extension of waiver on fees for digital transactions of banks and mobile payment services
Angara to Comelec: Work on making it easier for seniors and PWDs to vote during elections
Angara: There should be no delays in the implementation of Bayanihan 2
Angara says 2022 deadline for registration of 90 million Filipinos to PhilSys ID should be achieved without delay
Angara to CHEd and SUCs: Let’s work together in keeping Filipino graduates in the Philippines
Statement of Sen. Sonny Angara  (law sponsor) on the enactment of Bayanihan 2
END_OF_DOCUMENT_TOKEN_TO_BE_REPLACED