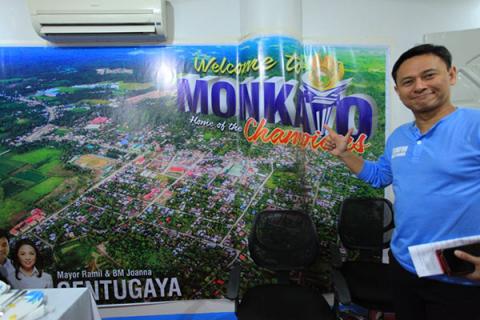 “It’s just a matter of time before Davao de Oro becomes a reality,” said Angara, whose political campaign on Wednesday will take him to Compostela Valley—the only province in Davao Region which does not have Davao in its name just yet.

The final copy of the bill renaming Compostela Valley to Davao de Oro has been transmitted last March to Malacañang for President Rodrigo Duterte’s signature.

Angara sponsored the bill in the Senate in his capacity as chair of the Senate Committee on Local Government, with Senate Majority Leader Juan Miguel Zubiri as author.

Renaming the province would mean more investments, according to the senator.

He said Davao de Oro is a fitting name for the province, having the largest gold deposits in the country, with 10 out of its 11 towns having one or more gold mines each.

Improved health responses needed to boost consumer confidence and spur economic growth -- Angara
Angara wants more public hospitals and medical professionals to ensure all Filipinos are provided with quality health care
Angara wants public libraries to provide essential services to learners under the new normal
Statement of Sen. Sonny Angara on the transmittal of the 2021 GAB by the House of Representatives
Angara bats for the naturalization of Angelo Kouame
Angara pushes for survivorship benefits for members of the National Prosecution Service
The President's report on the implementation of the Bayanihan 2
Angara calls for extension of waiver on fees for digital transactions of banks and mobile payment services
Angara to Comelec: Work on making it easier for seniors and PWDs to vote during elections
Angara: There should be no delays in the implementation of Bayanihan 2
Angara says 2022 deadline for registration of 90 million Filipinos to PhilSys ID should be achieved without delay
Angara to CHEd and SUCs: Let’s work together in keeping Filipino graduates in the Philippines
Statement of Sen. Sonny Angara  (law sponsor) on the enactment of Bayanihan 2
Statement of Sen. Sonny Angara  (law sponsor) on the enactment of Bayanihan 2
Institutionalizing digital payment systems needed to prevent the spread of diseases and for adopting to the new normal-- Angara
Bayanihan 2 supports domestic industries with Buy Local provisions
Sen. Sonny Angara on talks of a revolutionary government
STATEMENT OF SEN. ANGARA AFTER THE SENATE RECEIVED THE COPY OF THE PROPOSED 2021 BUDGET DOCUMENTS
Angara: Bayanihan 2 provides relief for consumers, households, employees and businesses affected by COVID-19
Hiring of more emergency health personnel and contact tracers to be funded by Bayanihan 2-- Angara
END_OF_DOCUMENT_TOKEN_TO_BE_REPLACED