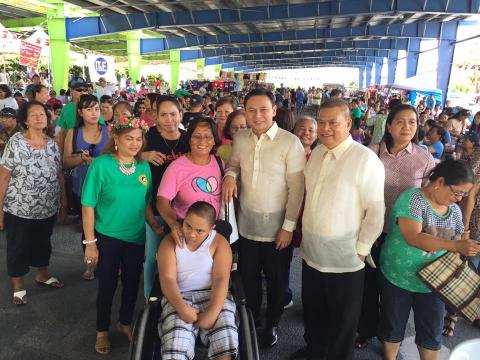 Reelectionist Senator Sonny Angara is looking forward to having more social welfare attachés (SWAs) in Philippine embassies and consulates, especially in countries with high concentration of overseas Filipino workers (OFWs), once the bill seeking to institutionalize their deployment abroad is signed into law by President Rodrigo Duterte.

The enrolled copy of the measure establishing the Office for Social Welfare Attaché has already been transmitted to Malacañang for the President’s signature. Angara is one of the bill’s authors in the Senate.

Angara said the deployment of more SWAs abroad is expected to fill the gap when it comes to comforting OFWs in distress and needing psychological services, such as victims of trafficking, illegal recruitment, sexual abuse and maltreatment.

“Having ‘malasakit officers’ in Philippine embassies and consulates is a reassurance that the government truly cares for our modern-day heroes, who sacrifice a lot to create better lives for their families and help the Philippine economy to stay afloat through their remittances,” said Angara, who is scheduled to campaign today in Batangas province, which belongs to the region with the highest number of OFWs.

But despite the huge number of OFWs scattered globally, Angara lamented that the country has only 7 SWAs who are currently deployed in Malaysia, Kuwait, Qatar, Hong Kong, Dubai, and Jeddah and Riyadh in Saudi Arabia.

Even if the government plans to deploy SWAs in Abu Dhabi, Jordan, Lebanon, Italy and South Korea this year, their number is not enough to attend to all OFWs who are vulnerable to extreme physical, emotional and psychological stress.

“In the division of labor inside what is basically a multi-agency embassy, there are assigned personnel that can handle legal cases, liaise with local police, as well as military, trade, agriculture attachés,” Angara said.

He pointed out that what is lacking is a trained professional who can provide the three essential C’s—care, comfort and counseling—to Filipinos in crisis situation and in need of special protection.

“Traumatized Filipinos require the services of a trained professional. Kung ang isang OFW ay biktima ng sexual abuse, ‘yung pagtulong sa kanila ay nangangailangan ng isang specialist and this is the kind of skill-set that might not be found in the organizational setup of an embassy,” he added.

The DSWD is also tasked to provide criteria for determining the selection of diplomatic posts to which SWAs will be deployed and the minimum qualifications and attributes of the SWA.

Under the 2018 and 2019 national budget, a total of P90 million is allocated for the Office of the Social Welfare Attaché.

Immunization of the population expected to begin with the approval of the COVID-19 vaccination program bill-- Angara
Angara seeks exemption to donor’s tax for donations of COVID-19 vaccines and critical supplies
Angara: Growing number of out of school youth is a cause of concern
Angara: Ecommerce will help ensure the survival of MSMEs and boost economic growth
Angara bill seeks to assist LGUs in shifting to digital
2021 judiciary budget will ensure implementation of the Judges-at-Large Act and the judiciary marshal service – Angara
STATEMENT OF SEN SONNY ANGARA
ANGARA: PGH AND EAST AVENUE MEDICAL CENTER RECEIVE ADDITIONAL FUNDING UNDER THE 2021 GAA TO SERVE MORE FILIPINOS IN NEED OF MEDICAL ATTENTION
PCMC receives additional support under the 2021 GAA to provide even better services for children in need of medical attention-- Angara
Statement of Sen. Sonny Angara on the signing of the 2021 GAA
Christmas message of Sen. Sonny Angara
Angara: Displaced workers will continue to receive assistance under the 2021 budget
Improved internet services even in far flung areas expected with the increase in the budget for the National Broadband Program-- Angara
Angara-- New and unfunded laws will receive funding under the 2021 GAA
Improved health responses needed to boost consumer confidence and spur economic growth -- Angara
Angara wants more public hospitals and medical professionals to ensure all Filipinos are provided with quality health care
Angara wants public libraries to provide essential services to learners under the new normal
Statement of Sen. Sonny Angara on the transmittal of the 2021 GAB by the House of Representatives
Angara bats for the naturalization of Angelo Kouame
Angara pushes for survivorship benefits for members of the National Prosecution Service
END_OF_DOCUMENT_TOKEN_TO_BE_REPLACED