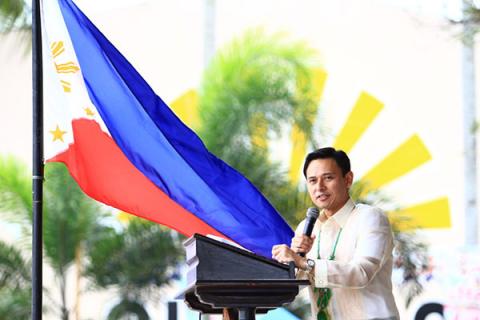 Reelectionist Senator Sonny Angara is encouraging Filipinos here and abroad to learn more about their history and culture by visiting heritage sites and cultural centers in Philippine embassies during the celebration of the National Heritage Month in May.

“Heritage is about the things from the past which are valued enough today to save for tomorrow,” said Angara, who co-authored Republic Act 10066 or the National Cultural Heritage Act of 2009, along with his father, the late Senate President Edgardo Angara.

The senator said the Philippines boasts a rich and complex history, owing to centuries of interaction and exchange among Malay settlers, Chinese and Middle Eastern traders, and several foreign conquerors, notably the Spaniards.

Such heritage, he said, still stands in pockets in Metro Manila and other parts of the country and most of them are Spanish-era churches. “They are often hidden—or worse, neglected—having been overrun by skyscrapers, malls and other vestiges of urban sprawl,” he pointed out.

Angara said the country is also full of craftsmen and artists, like the Paete wood woodcarvers, the painters of Angono, the T’Nalak “dream weavers” from Lake Sebu, and the sabutan weavers of Baler.

“Their beautiful works showcase Filipino skill and creativity, yet receive marginal attention at best,” said the lawmaker from Aurora, who is running under the platform “Alagang Angara.”

For Filipinos abroad, Angara said they could visit Sentro Rizal, the overseas Philippine cultural center much like the Spain’s Instituto Cervantes and Italy’s Dante Alighieri Center. Sentro Rizal was created under RA 10066 to promote the Filipino art, culture and language to the world.

So far, there are a total of 31 Sentro Rizal in different Philippine embassies and consulates in Europe, Middle East, East Asia, Southeast Asia, South America and New Zealand.  The first Sentro Rizal was established in Madrid, Spain in 2011.

Angara called on Filipinos to help protect and preserve the country’s historical monuments and artworks of cultural heritage, saying these are “a part of us.”

Besides, Angara said heritage preservation provides an anchor for nationhood and concretizes people’s sense of identity through buildings, sculptures, paintings, songs or stories.

“That’s why as a nation, we should do a better job in preserving our heritage, and supporting our artists and craftsmen. That should be the underlying message people should take away as the country observes the National Heritage Month,” he stressed.

Angara: Pilot implementation of face-to-face classes needed before resumption nationwide
Immunization of the population expected to begin with the approval of the COVID-19 vaccination program bill-- Angara
Angara seeks exemption to donor’s tax for donations of COVID-19 vaccines and critical supplies
Angara: Growing number of out of school youth is a cause of concern
Angara: Ecommerce will help ensure the survival of MSMEs and boost economic growth
Angara bill seeks to assist LGUs in shifting to digital
2021 judiciary budget will ensure implementation of the Judges-at-Large Act and the judiciary marshal service – Angara
STATEMENT OF SEN SONNY ANGARA
ANGARA: PGH AND EAST AVENUE MEDICAL CENTER RECEIVE ADDITIONAL FUNDING UNDER THE 2021 GAA TO SERVE MORE FILIPINOS IN NEED OF MEDICAL ATTENTION
PCMC receives additional support under the 2021 GAA to provide even better services for children in need of medical attention-- Angara
Statement of Sen. Sonny Angara on the signing of the 2021 GAA
Christmas message of Sen. Sonny Angara
Angara: Displaced workers will continue to receive assistance under the 2021 budget
Improved internet services even in far flung areas expected with the increase in the budget for the National Broadband Program-- Angara
Angara-- New and unfunded laws will receive funding under the 2021 GAA
Improved health responses needed to boost consumer confidence and spur economic growth -- Angara
Angara wants more public hospitals and medical professionals to ensure all Filipinos are provided with quality health care
Angara wants public libraries to provide essential services to learners under the new normal
Statement of Sen. Sonny Angara on the transmittal of the 2021 GAB by the House of Representatives
Angara bats for the naturalization of Angelo Kouame
END_OF_DOCUMENT_TOKEN_TO_BE_REPLACED