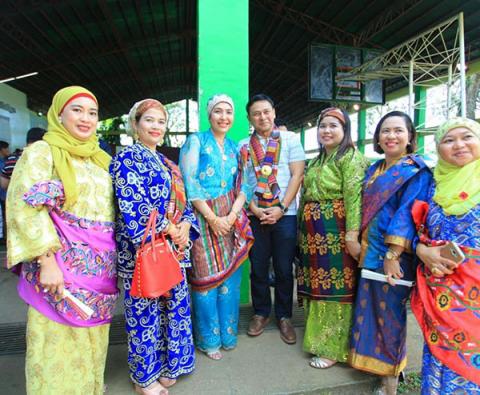 Reelectionist Senator Sonny Angara renewed his call for the full implementation of a law requiring all schools nationwide to teach the history of Filipino Muslims and indigenous peoples (IPs), saying a study of Philippine history and culture would be incomplete without their mention.

“As we allow the Bangsamoro people to fulfill their dreams and aspirations through the establishment of a new autonomous political entity, it is especially important to look back on their history and to acknowledge and appreciate Filipino Muslim contributions,” the lawmaker said on Tuesday when he brought his “Alagang Angara” campaign to Cotabato City, the seat of power of the newly created Bangsamoro Autonomous Region in Muslim Mindanao (BARMM).

Angara made the call as the nation celebrates May as the National Heritage Month, which aims to promote consciousness, respect and love for the cultural heritage among Filipinos. This year’s theme, “Mga Pinuno para sa Pamana” (Leaders for Heritage), serves as a challenge to every Filipino to take the lead in preserving and promoting our heritage.

Republic Act 10908 or the Integrated History Act of 2016, which Angara principally authored, mandates the teaching of history, culture and identity of IPs and Filipino Muslims in both basic and higher education in the country.

“The history, culture and identity of Filipino Muslims and IPs should be integrated in the formulation of the curriculum for the study of Philippine history, including the writing, printing and publication of textbooks and other reading materials,” Angara said, citing a provision in RA 10908.

Angara noted that the Department of Education is currently implementing the law, but only in select schools, mostly in Mindanao.

He expressed hope that the government would be able to fully enforce the law in all schools nationwide, starting this incoming academic year.

As chairman of the Senate Committee on Local Government, Angara also co-sponsored RA 11054, also known as the Bangsamoro Organic Law, which paved the way for the establishment of the BARMM replacing the Autonomous Region in Muslim Mindanao (ARMM).

RA 11054—a realization of the long peace negotiations between the government and the Moro Islamic Liberation Front—was overwhelmingly ratified by the Bangsamoro people during a two-part plebiscite held early this year.

The BARMM is envisioned as a political entity that would realize the aspirations of the Bangsamoro people for genuine self-determination under a ministerial form of government and ensure autonomy far more than what the ARMM provided.

It is seen as a solution to the problems that the ARMM failed to address, such as poverty and unstable peace and order situation.

Immunization of the population expected to begin with the approval of the COVID-19 vaccination program bill-- Angara
Angara seeks exemption to donor’s tax for donations of COVID-19 vaccines and critical supplies
Angara: Growing number of out of school youth is a cause of concern
Angara: Ecommerce will help ensure the survival of MSMEs and boost economic growth
Angara bill seeks to assist LGUs in shifting to digital
2021 judiciary budget will ensure implementation of the Judges-at-Large Act and the judiciary marshal service – Angara
STATEMENT OF SEN SONNY ANGARA
ANGARA: PGH AND EAST AVENUE MEDICAL CENTER RECEIVE ADDITIONAL FUNDING UNDER THE 2021 GAA TO SERVE MORE FILIPINOS IN NEED OF MEDICAL ATTENTION
PCMC receives additional support under the 2021 GAA to provide even better services for children in need of medical attention-- Angara
Statement of Sen. Sonny Angara on the signing of the 2021 GAA
Christmas message of Sen. Sonny Angara
Angara: Displaced workers will continue to receive assistance under the 2021 budget
Improved internet services even in far flung areas expected with the increase in the budget for the National Broadband Program-- Angara
Angara-- New and unfunded laws will receive funding under the 2021 GAA
Improved health responses needed to boost consumer confidence and spur economic growth -- Angara
Angara wants more public hospitals and medical professionals to ensure all Filipinos are provided with quality health care
Angara wants public libraries to provide essential services to learners under the new normal
Statement of Sen. Sonny Angara on the transmittal of the 2021 GAB by the House of Representatives
Angara bats for the naturalization of Angelo Kouame
Angara pushes for survivorship benefits for members of the National Prosecution Service
END_OF_DOCUMENT_TOKEN_TO_BE_REPLACED