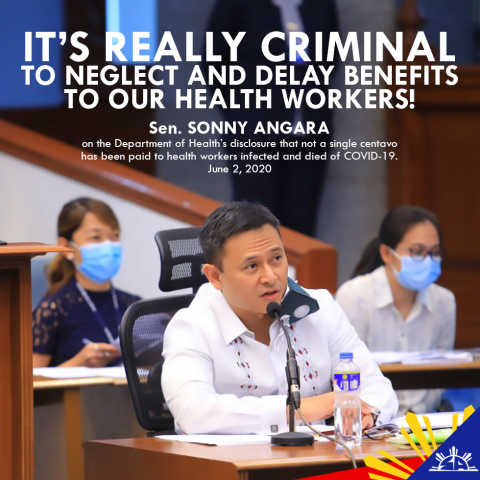 Several senators called out the Department of Health (DOH) for failing to compensate the health workers who have died while helping Filipinos who have been afflicted with the COVID-19 virus.

During the plenary debates on Senate Bill 1564 or the proposed Bayanihan To Recover as One Act, it was revealed that there have been no claims for compensation for health workers under Republic Act 11469 because the implementing rules and regulations (IRR) for this provision has not been crafted.

Senate Committee on Finance Chairman Sonny Angara aired his frustration over the report of the DOH on the availment of the said compensation, which he said was “criminal” considering that there appears to be neglect on the part of the agency to issue the IRR, which resulted in the delay in the release of these benefits to the COVID-19 frontliners.

“I’m very disappointed to hear the response from the DOH. The Senate labored, burned the midnight oil to pass Bayanihan One. It’s quite upsetting to find out that so many months have gone without the DOH crafting the IRR here. So many health workers have suffered, whether they have died or have been severely afflicted with the COVID virus. Again, it’s very upsetting,” Angara said.

“It’s really criminal, this neglect to pass this (IRR); to delay these types of benefits. We keep praising them as our heroes but it’s mere lip service if we don’t give them anything material,” he added.

Under Section 4(f) of RA 11469 or the Bayanihan to Heal as One Act, public and private health workers who die while fighting the COVID-19 pandemic will be provided with compensation amounting to P1 million each.

Public and private health workers who contract severe COVID-19 infection while in the line of duty will be compensated with P100,000 each.

The issue was raised by Senator Richard Gordon, who introduced the provision of the law as a way to recognize the sacrifices made by the health frontliners in the country’s fight against COVID-19.

According to Gordon, 32 health workers have died in the line of duty and there are two who are currently severely ill from COVID-19.

“That is a serious neglect. Sometimes, may kasabihan na nauuna ang salita sa gawa. We should call the attention of whoever it is that will provide this because 32 have died. About two are severely sick that should be given some support. Those who are severely ill must be supported,” Gordon said.

Senator Francis Pangilinan said this development is “truly disappointing and truly indicative of the lack of compassion of whoever the DOH is supposed to address this with the IRR.”

“This is unacceptable and unforgivable. They have already died, they have already suffered, and we continue to allow them to suffer more because of this failure and this inaction on the part of the Department of Health. This is completely and totally unacceptable,” Pangilinan said.

Senator Panfilo Lacson said the government owes the families of the 32 health workers’ families P32 million and the absence of an IRR “should not be an excuse not to comply with the law.”

Angara said that he will do what he can in his capacity as the Finance Committee chairman to nudge the DOH in the right direction.

He also suggested that all the members of the Senate sign a letter addressed to the DOH to underscore the urgency of the matter.

Immunization of the population expected to begin with the approval of the COVID-19 vaccination program bill-- Angara
Angara seeks exemption to donor’s tax for donations of COVID-19 vaccines and critical supplies
Angara: Growing number of out of school youth is a cause of concern
Angara: Ecommerce will help ensure the survival of MSMEs and boost economic growth
Angara bill seeks to assist LGUs in shifting to digital
2021 judiciary budget will ensure implementation of the Judges-at-Large Act and the judiciary marshal service – Angara
STATEMENT OF SEN SONNY ANGARA
ANGARA: PGH AND EAST AVENUE MEDICAL CENTER RECEIVE ADDITIONAL FUNDING UNDER THE 2021 GAA TO SERVE MORE FILIPINOS IN NEED OF MEDICAL ATTENTION
PCMC receives additional support under the 2021 GAA to provide even better services for children in need of medical attention-- Angara
Statement of Sen. Sonny Angara on the signing of the 2021 GAA
Christmas message of Sen. Sonny Angara
Angara: Displaced workers will continue to receive assistance under the 2021 budget
Improved internet services even in far flung areas expected with the increase in the budget for the National Broadband Program-- Angara
Angara-- New and unfunded laws will receive funding under the 2021 GAA
Improved health responses needed to boost consumer confidence and spur economic growth -- Angara
Angara wants more public hospitals and medical professionals to ensure all Filipinos are provided with quality health care
Angara wants public libraries to provide essential services to learners under the new normal
Statement of Sen. Sonny Angara on the transmittal of the 2021 GAB by the House of Representatives
Angara bats for the naturalization of Angelo Kouame
Angara pushes for survivorship benefits for members of the National Prosecution Service
END_OF_DOCUMENT_TOKEN_TO_BE_REPLACED