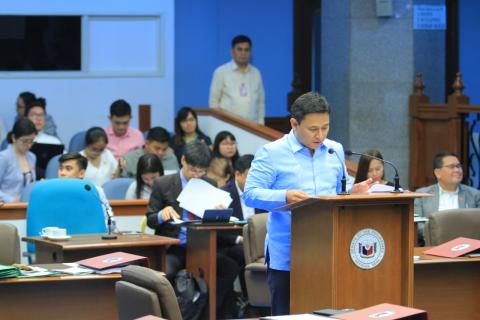 Just like what has been done in previous congresses, Angara said that the vice chairpersons of the committee will be tasked to handle the budgets of the different agencies in order “to expedite the hearings.”

The P3.7 trillion national budget for 2019 was signed by the President only last April due to delays in its approval by Congress.

This led to several delays in the implementation of various key projects of the government, something which Angara said should not happen again for the 2020 national budget.

“We owe it to the people to pass the budget on time. Any delay in the implementation of public programs and the delivery of services is a disservice to them,” Angara said.

Angara said he would work closely with the executive branch with regard to the administration’s priorities and find ways to fund them.

Among the key areas that Angara said he would like to focus on are education, health, infrastructure and rural development.

“We must build on these gains and make sure that the taxpayers are getting the service they deserve. We will go over the 2020 budget thoroughly and so that nothing goes to waste,” he added.

He said the budget hearings would be transparent “because the people have the right to know where their taxes go.”

Angara: Pilot implementation of face-to-face classes needed before resumption nationwide
Immunization of the population expected to begin with the approval of the COVID-19 vaccination program bill-- Angara
Angara seeks exemption to donor’s tax for donations of COVID-19 vaccines and critical supplies
Angara: Growing number of out of school youth is a cause of concern
Angara: Ecommerce will help ensure the survival of MSMEs and boost economic growth
Angara bill seeks to assist LGUs in shifting to digital
2021 judiciary budget will ensure implementation of the Judges-at-Large Act and the judiciary marshal service – Angara
STATEMENT OF SEN SONNY ANGARA
ANGARA: PGH AND EAST AVENUE MEDICAL CENTER RECEIVE ADDITIONAL FUNDING UNDER THE 2021 GAA TO SERVE MORE FILIPINOS IN NEED OF MEDICAL ATTENTION
PCMC receives additional support under the 2021 GAA to provide even better services for children in need of medical attention-- Angara
Statement of Sen. Sonny Angara on the signing of the 2021 GAA
Christmas message of Sen. Sonny Angara
Angara: Displaced workers will continue to receive assistance under the 2021 budget
Improved internet services even in far flung areas expected with the increase in the budget for the National Broadband Program-- Angara
Angara-- New and unfunded laws will receive funding under the 2021 GAA
Improved health responses needed to boost consumer confidence and spur economic growth -- Angara
Angara wants more public hospitals and medical professionals to ensure all Filipinos are provided with quality health care
Angara wants public libraries to provide essential services to learners under the new normal
Statement of Sen. Sonny Angara on the transmittal of the 2021 GAB by the House of Representatives
Angara bats for the naturalization of Angelo Kouame
END_OF_DOCUMENT_TOKEN_TO_BE_REPLACED