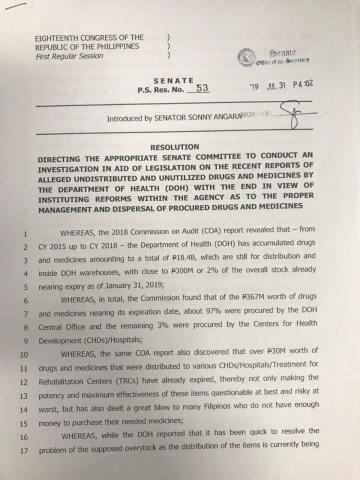 With so many Filipinos struggling to find ways to gain access to medicine due to lack of funds, Senator Sonny Angara aired his concern over the continuing problem of the Department of Health (DOH) with the overstocking of drugs and medicine.

Angara, the chairman of the Senate Committee on Finance, has filed a resolution calling for an inquiry into the overstocking of close to P20 billion worth of drugs and medicine by the DOH in its warehouses, as cited by the Commission on Audit in its 2018 report on the agency.

According to Angara, the DOH’s “perennial problem with undistributed expired drugs” will also be a “major point of interest” in the upcoming Senate hearings on the proposed 2020 budget of the agency.

Angara said the Health Department’s wastage of hundreds of millions worth of medicines “is becoming like dengue, it has become an annual thing.”

“And to think, many Filipinos for lack of money can’t buy medicine or are undermedicating themselves. And then they read reports about drugs in some government warehouses going to waste,” Angara added.

Angara said DOH officials who will appear before his panel “should be ready with a plan on how to end this problem.”

“Maghanda na sila ng prescriptions. Diagnose the problem and come up with solutions. Kung constipated ang drug distribution system, then what is the laxative?” he said.

In its annual audit report on the DOH for 2018, the COA noted that over P18 billion worth of drugs and medicine were stocked up inside its warehouses, a significant portion of which were approaching their expiry dates.

The COA also found that over P30 million worth of drugs and medicine distributed to various centers for health development, treatment for rehabilitation centers, and hospitals were already expired.

A total of P367.1 million worth of drugs and medicine were found to be nearing expiry, raising concerns that these would almost certainly go to waste.

“Is it a question of overprescription or the prescription of the wrong drugs? Ang national order form ba based on needs or supplier-driven? Saan ba ang bara sa distribution?” he said.

Angara: Benefits for health workers to continue even after Bayanihan 2 expiration on June 30
EASTER SUNDAY MESSAGE OF SEN. SONNY ANGARA
Statement of Sen. Angara on the procurement of vaccines by the private sector
SK reform bill hurdles committee level-- Angara
Angara: Kouame an asset to Philippine basketball
Angara pushes for 100% increase in PDIC deposit insurance coverage
Angara: Pilot implementation of face-to-face classes needed before resumption nationwide
Immunization of the population expected to begin with the approval of the COVID-19 vaccination program bill-- Angara
Angara seeks exemption to donor’s tax for donations of COVID-19 vaccines and critical supplies
Angara: Growing number of out of school youth is a cause of concern
Angara: Ecommerce will help ensure the survival of MSMEs and boost economic growth
Angara bill seeks to assist LGUs in shifting to digital
2021 judiciary budget will ensure implementation of the Judges-at-Large Act and the judiciary marshal service – Angara
STATEMENT OF SEN SONNY ANGARA
ANGARA: PGH AND EAST AVENUE MEDICAL CENTER RECEIVE ADDITIONAL FUNDING UNDER THE 2021 GAA TO SERVE MORE FILIPINOS IN NEED OF MEDICAL ATTENTION
PCMC receives additional support under the 2021 GAA to provide even better services for children in need of medical attention-- Angara
Statement of Sen. Sonny Angara on the signing of the 2021 GAA
Christmas message of Sen. Sonny Angara
Angara: Displaced workers will continue to receive assistance under the 2021 budget
Improved internet services even in far flung areas expected with the increase in the budget for the National Broadband Program-- Angara
END_OF_DOCUMENT_TOKEN_TO_BE_REPLACED