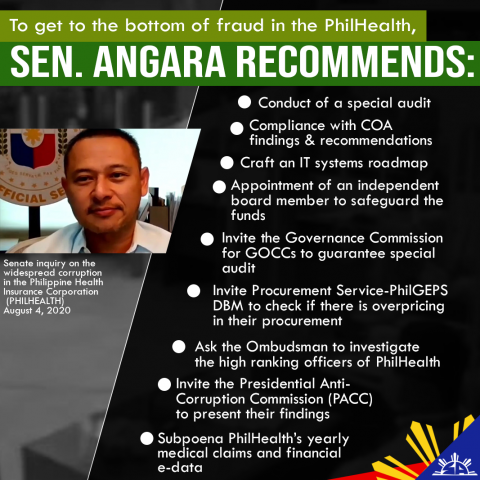 Senator Sonny Angara said today that immediate actions should be taken to plug the loopholes at the Philippine Health Insurance Corporation (PhilHealth) to stop the bleeding of the state health insurer.

During the Senate’s inquiry into the alleged widespread corruption within PhilHealth, a former anti-fraud officer of the corporation claimed that over P15 billion has been wasted or stolen over the years due to rampant questionable transactions facilitated by a syndicate.

Angara said the claims of such a huge amount being lost due to alleged leakages or corruption in PhilHealth are alarming considering that the corporation is already drawing on its reserves and is expected to record a net operating loss of P90 billion this year and P147 billion in 2021 as benefit payouts continue to increase because of the pandemic.

“With the actuary saying reserves will run out in 2021, drastic action is needed against any mafia and corrupt practices at PhilHealth. Congress has appropriated approximately P400 billion for PhilHealth in less than a decade (not including premiums). We need stronger safeguards and better systems,” Angara said.

“PhilHealth has shown weak institutional checks and balances as it has been plagued over the years by fraud, scandals and scams such as those involving cataract and dialysis claims and now this,” he added.

In order for genuine reforms to take place within the institution, Angara said PhilHealth president and CEO Ricardo Morales “needs to be more activist against corruption.

He noted how Morales responded to the claims made by the whistleblowers by demonizing them instead of verifying the information.

“Many whistleblowers are far from being perfect and blow the whistle for highly partisan or political reasons. He (Morales) may be right that they may have suspect motives but the issues they raise may also be valid and he should make the most of the information given,” Angara said.

“He asks for support for greater spending on IT yet matamlay siya dito sa issue ng overpricing. He has to be more outraged,” he added.

In his manifestation during the hearing, Angara presented several recommendations to plug the leaks and prevent the collapse of PhilHealth.

Top of the list is the conduct of a special audit of the funds of PhilHealth with particular focus on the payments that were “facilitated or in a brisk manner.”

“This is called for or has support under the Universal Healthcare Law. It also has support under the GCG (GOCC Governance Act of 2011) law where the head of the GCG can call for a special audit of any government corporation. I think it’s about time we look in depth not just at the macro, but the micro situation,” Angara said.

While there are questions of overpricing in PhilHealth’s information technology (IT) projects, Angara said there is a need for the firm to invest in a strong IT system in order to crack down on fraud and improve overall efficiency.

“We need to invest in IT but it should not be an investment in a black hole na hindi natin nakikita saan napupunta yung pera. Kailangan may hangganan, may finish line. Ano yung roadmap? What are we aiming for? It must be finite, it must be definite,” Angara said.

Angara strongly suggested the appointment of independent board members of PhilHealth “to really safeguard the funds.”

In order to shed light on the various reports of losses and leakages due to inefficiencies, loopholes or corruption, Angara called for the presence of representatives from the Commission on Audit, the GCG and the Philippine Government Electronic Procurement Service (PHILGEPS) in the next hearing of the Senate.

Angara also aired his support to the call for the Ombudsman to investigate some of the highly-placed officers of PhilHealth, especially those who have been in office for some time already.

“They can conduct a confidential investigation and if necessary, preventively suspend some of the wrongdoers there in PhilHealth,” he said.

Angara supports PPPs as the way to go for many local projects to ensure their implementation
Angara celebrates the enactment of three laws for the youth
Statement of Sen Angara on the Enactment into Law of the Social Pension for Seniors
Sen. Angara on the passing of former Pres. Fidel V Ramos
Angara-- Restore the heritage sites damaged by the Abra quake at the soonest possible time
Angara sees the establishment of satellite specialty hospitals as timely and doable
Reaksyon ni Sen. Sonny Angara sa SONA ni PBBM
Statement of Senator Sonny Angara
INCOMING DBM SECRETARY NI PBBM, HIGHLY-QUALIFED, MAY MAIPAGMAMALAKING TRACK-RECORD -- ANGARA
Statement of Sen. Sonny Angara on the Appointment of Amenah Pangandaman as DBM Secretary
PDIC charter amendments for a stronger and more resilient banking system—Angara
Kaugnay sa muling paglobo ng COVID cases sa bansa: “MAGPABAKUNA, SUMUNOD SA HEALTH PROTOCOLS AT PATULOY NA PAG-INGATAN ANG KALUSUGAN” - ANGARA
Statement of Committee on Finance Chairman, Sen. Sonny Angara on the signing of the 2022 GAA
Angara reminds PhilHealth of their obligations to the public
Threat of Omicron highlights need to improve biosurveillance and genome sequencing capabilities—Angara
Angara: Don’t let vaccines go to waste-- Allow booster shots for private sector workers
SEN. ANGARA ON THE THREAT OF HOSPITALS TO WITHDRAW FROM PHILHEALTH SYSTEM BECAUSE OF DELAYED REIMBURSMENTS OF CLAIMS:
Angara: Decline in COVID cases should not result in complacency
Angara: Go the extra mile to vaccinate our senior citizens
Angara to DOLE: Targeted interventions needed to ensure no one is left behind
END_OF_DOCUMENT_TOKEN_TO_BE_REPLACED