Angara— A reenacted budget must be avoided like a plague 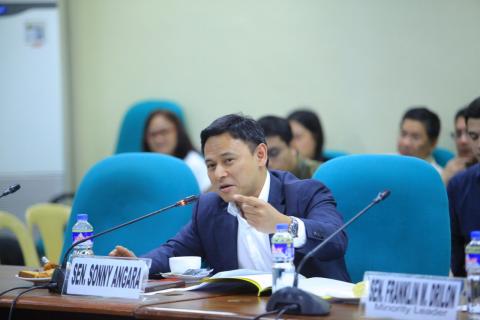 The country cannot afford another delay in the approval of the national budget so both houses of Congress must do everything it can to avoid a repeat of last year’s sorry experience.

Senator Sonny Angara, the chairman of the Senate Committee on Finance, said there is reason to be optimistic that the P4.1 trillion national budget for 2020 will be passed on time based on the statements coming from the leadership of the House of Representatives.

According to the House leadership, the target is to have the budget measure approved on their end before October 5, 2019.

“We will be observing the practice of holding parallel hearings so that when the House-approved GAB (general appropriations bill) will arrive here in October or first week of November we are done with the exhaustive review of the agency budgets at the committee level,” Angara said.

“The fighting target is to have it signed on or before December 15. What is important is that the nation will greet the new year with a new national budget,” Angara added.

Due to delays in the approval of the P3.7 trillion national budget for 2019, the government was forced to operate on a reenacted budget for the first four months of the year.

Angara noted how the four-month delay in the enactment of the budget had an adverse impact, not only on the economy as a whole, but on the delivery of services to the people.

Key infrastructure projects, both new and ongoing, faced delays in their implementation due to lack of funding. As a consequence, there were fewer job opportunities available.

Public social services, particularly the Pantawid Pamilyang Pilipino Program or the 4Ps, were also affected by the delay in the enactment of the budget.

Growth of the economy also took a huge hit, with the National Economic and Development Authority adjusting the full-year gross domestic product target from 7 to 8 percent to 6.1 to 6.3 percent.

“I have always taken the position that a reenacted budget must be avoided like a plague,” Angara said.

Angara said he shares the desire of President Duterte to cut bureaucratic red tape “because the people deserve the best service possible from its government.”

“We will place particular focus on getting agencies to spend their budgets efficiently and judiciously. We should avoid underspending, which has been a problem of several agencies since the previous administration,” Angara said.

“What is important here is not just passing the budget on time but crafting a budget that is in synch with what the people want and what national development requires. There is a deadline to be met but most important are the aspirations to be satisfied,” he added.

Angara: Benefits for health workers to continue even after Bayanihan 2 expiration on June 30
EASTER SUNDAY MESSAGE OF SEN. SONNY ANGARA
Statement of Sen. Angara on the procurement of vaccines by the private sector
SK reform bill hurdles committee level-- Angara
Angara: Kouame an asset to Philippine basketball
Angara pushes for 100% increase in PDIC deposit insurance coverage
Angara: Pilot implementation of face-to-face classes needed before resumption nationwide
Immunization of the population expected to begin with the approval of the COVID-19 vaccination program bill-- Angara
Angara seeks exemption to donor’s tax for donations of COVID-19 vaccines and critical supplies
Angara: Growing number of out of school youth is a cause of concern
Angara: Ecommerce will help ensure the survival of MSMEs and boost economic growth
Angara bill seeks to assist LGUs in shifting to digital
2021 judiciary budget will ensure implementation of the Judges-at-Large Act and the judiciary marshal service – Angara
STATEMENT OF SEN SONNY ANGARA
ANGARA: PGH AND EAST AVENUE MEDICAL CENTER RECEIVE ADDITIONAL FUNDING UNDER THE 2021 GAA TO SERVE MORE FILIPINOS IN NEED OF MEDICAL ATTENTION
PCMC receives additional support under the 2021 GAA to provide even better services for children in need of medical attention-- Angara
Statement of Sen. Sonny Angara on the signing of the 2021 GAA
Christmas message of Sen. Sonny Angara
Angara: Displaced workers will continue to receive assistance under the 2021 budget
Improved internet services even in far flung areas expected with the increase in the budget for the National Broadband Program-- Angara
END_OF_DOCUMENT_TOKEN_TO_BE_REPLACED