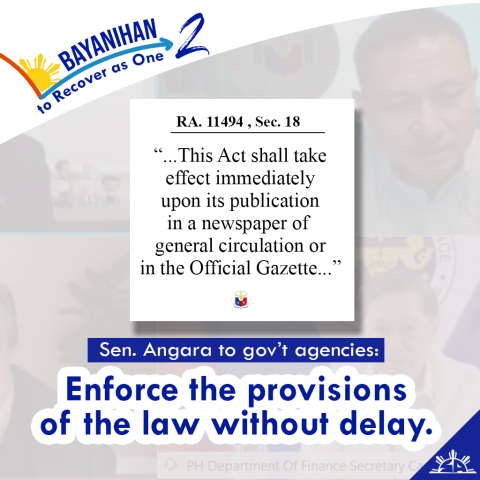 “We passed Bayanihan 2 and we put in there that it is immediately effective even without the IRR (implementing rules and regulations). But some of the stakeholders are still waiting for orders that are already enforced,” Angara said.

“Although the implementing rules are no longer needed for effectivity, I think they are waiting. BSP (Bangko Sentral ng Pilipinas) has issued an order but perhaps others like the Insurance Commission can issue compliance orders. That would be great for our borrowers and the affected sectors. Maybe we can remind them or inform them to issue these orders,” he added.

Section 18 of RA 11494 states that the law “shall take effect immediately upon its publication in a newspaper of general circulation or in the Official Gazette.”

During the bicameral conference committee meetings on Bayanihan 2, Angara noted there was an understanding among the members that an IRR was no longer needed for the implementation of the law.

Many government agencies and private entities have been hesitant in implementing the provisions of Bayanihan 2 as they sought for guidance in the form of an IRR.

Some agencies such as the BSP have already issued guidelines on the implementation of the pertinent provisions of Bayanihan 2.

In the case of BSP, it already issued a memorandum for all covered institutions to “implement a mandatory, one-time, 60-day grace period to all loans that are existing, current and outstanding, falling due, or any part thereof, on or before December 31, 2020.”

Finance Secretary Carlos Dominguez III explained during the budget hearing that the DOF team has already submitted its draft IRR for Bayanihan 2 to Malacañang, a day after it was signed into law by President Rodrigo Duterte last September 11.

Dominguez said that he will ask Malacañang to “move ahead very quickly” in response to the appeal of Congress.

Angara: Benefits for health workers to continue even after Bayanihan 2 expiration on June 30
EASTER SUNDAY MESSAGE OF SEN. SONNY ANGARA
Statement of Sen. Angara on the procurement of vaccines by the private sector
SK reform bill hurdles committee level-- Angara
Angara: Kouame an asset to Philippine basketball
Angara pushes for 100% increase in PDIC deposit insurance coverage
Angara: Pilot implementation of face-to-face classes needed before resumption nationwide
Immunization of the population expected to begin with the approval of the COVID-19 vaccination program bill-- Angara
Angara seeks exemption to donor’s tax for donations of COVID-19 vaccines and critical supplies
Angara: Growing number of out of school youth is a cause of concern
Angara: Ecommerce will help ensure the survival of MSMEs and boost economic growth
Angara bill seeks to assist LGUs in shifting to digital
2021 judiciary budget will ensure implementation of the Judges-at-Large Act and the judiciary marshal service – Angara
STATEMENT OF SEN SONNY ANGARA
ANGARA: PGH AND EAST AVENUE MEDICAL CENTER RECEIVE ADDITIONAL FUNDING UNDER THE 2021 GAA TO SERVE MORE FILIPINOS IN NEED OF MEDICAL ATTENTION
PCMC receives additional support under the 2021 GAA to provide even better services for children in need of medical attention-- Angara
Statement of Sen. Sonny Angara on the signing of the 2021 GAA
Christmas message of Sen. Sonny Angara
Angara: Displaced workers will continue to receive assistance under the 2021 budget
Improved internet services even in far flung areas expected with the increase in the budget for the National Broadband Program-- Angara
END_OF_DOCUMENT_TOKEN_TO_BE_REPLACED