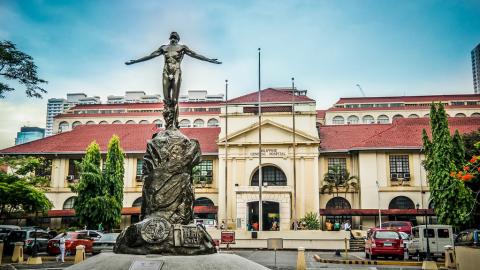 Senator Sonny Angara is pushing for the establishment of hospitals within state universities and colleges (SUC) as a way to help fortify the country’s health system.

When the country experienced a surge in COVID-19 cases in the country, the entire nation was confronted with the reality that there were not enough hospital beds to cater to the patients and that more doctors and other medical personnel are needed to treat them.

Based on a recent study conducted by the University of the Philippines, the country has an average of 3.7 doctors for every 10,000 members of the population.

This is way below the recommendation of the World Health Organization of 10 doctors for every 10,000 population and only the National Capital Region (NCR) was able to meet this ratio.

Based on data from the Health Human Resource Development Bureau of the Department of Health, there are 860,000 medical professionals registered in the country, but only 189,000 are actually serving in either public or private institutions.

The same UP study also noted the deficiencies in the hospital bed to population ratio.

“The reality that six out of 10 Filipinos die without seeing a medical professional is very alarming. After seeing the data, it explains why our healthcare system was overwhelmed when we were hit by the COVID-19 pandemic,” Angara said.

“We need to strengthen our healthcare system and two of the initial steps that we can take is to produce more doctors and nurses and to increase the number of hospitals that will serve our people,” he added.

Angara has filed Senate Bill 1850 or the Healthcare Facility Augmentation Act, which seeks to establish one hospital in every SUC that offers a medical degree.

Each of these hospitals will have a bed capacity of not less than 50 beds within the grounds of the SUCs.

Under the bill, the graduates of the medical degree programs in the concerned SUCs who availed of a government scholarship program shall be required to render their return service in the hospital of the SUC from which they graduate from.

On the other hand, there are 45 SUCs that offer BS nursing courses.

Angara said he would like to see more SUCs offering medical courses so that students, who want to pursue a career in medicine, would have a greater opportunity to do so wherever they are situated.

Angara has filed Senate Resolution 528, which seeks to look into the financial requirement needed to establish public medical schools in every region of the country,

“SUCs, as they are funded by the national government and are deemed the most accessible higher educational institution to the general public, should take up the cudgels of ensuring that their own regions would have enough medical manpower to be ready for existing and emerging health services needs of the country,” Angara said in filing the resolution.

A separate resolution was filed by Angara to look into the financial requirement to achieve the desired ratio of healthcare workers to the population.

In filing Senate Resolution 529, Angara said that the inquiry is intended to ensure that all practicing healthcare workers in the country will not only be employed, but also utilized and compensated competitively.

“As we further improve our healthcare system especially with the soon-to-be fully implemented Universal Health Care Law, there is an urgent need for us to utilize what many consider to be one of our best resource—our healthcare workers, hence it is only vital that the government examine how we can fully utilize and appreciate their value to the country by first determining the needed cost to provide a competitive compensation to these healthcare workers in the long run,” Angara said.

Statement of Sen. Angara on the procurement of vaccines by the private sector
SK reform bill hurdles committee level-- Angara
Angara: Kouame an asset to Philippine basketball
Angara pushes for 100% increase in PDIC deposit insurance coverage
Angara: Pilot implementation of face-to-face classes needed before resumption nationwide
Immunization of the population expected to begin with the approval of the COVID-19 vaccination program bill-- Angara
Angara seeks exemption to donor’s tax for donations of COVID-19 vaccines and critical supplies
Angara: Growing number of out of school youth is a cause of concern
Angara: Ecommerce will help ensure the survival of MSMEs and boost economic growth
Angara bill seeks to assist LGUs in shifting to digital
2021 judiciary budget will ensure implementation of the Judges-at-Large Act and the judiciary marshal service – Angara
STATEMENT OF SEN SONNY ANGARA
ANGARA: PGH AND EAST AVENUE MEDICAL CENTER RECEIVE ADDITIONAL FUNDING UNDER THE 2021 GAA TO SERVE MORE FILIPINOS IN NEED OF MEDICAL ATTENTION
PCMC receives additional support under the 2021 GAA to provide even better services for children in need of medical attention-- Angara
Statement of Sen. Sonny Angara on the signing of the 2021 GAA
Christmas message of Sen. Sonny Angara
Angara: Displaced workers will continue to receive assistance under the 2021 budget
Improved internet services even in far flung areas expected with the increase in the budget for the National Broadband Program-- Angara
Angara-- New and unfunded laws will receive funding under the 2021 GAA
Improved health responses needed to boost consumer confidence and spur economic growth -- Angara
END_OF_DOCUMENT_TOKEN_TO_BE_REPLACED