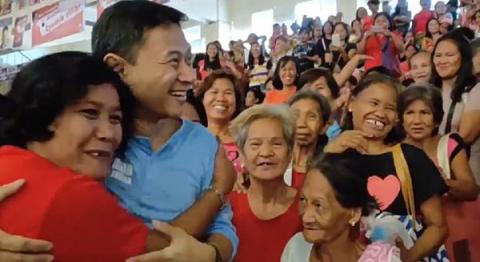 Amid rising population of Filipino senior citizens and scarcity of specialists to treat them, reelectionist Senator Sonny Angara is urging medical students to pursue geriatric medicine, a specialty that focuses on the health care of elderly people.

The number of Filipinos at or over age 60 almost doubled to 8 million from 4.6 million between 2000 and 2018, according to government data. But despite this staggering number, there are only over a hundred doctors who specialize in treating senior citizens.

To address the shortage of geriatrics health care professionals, Angara said it was important to encourage aspiring doctors to “develop competence in caring for senior citizens or, at the very least, to learn the basics of geriatric medicine.”

“One solution to meet the health care needs of the growing number of Filipino senior citizens is to increase the number of doctors and nurses specializing in the medical care of elderly people,” said Angara, a known champion for senior citizens in the Senate.

“This is why we appeal to aspiring doctors to pursue geriatric medicine. In doing so, they can do an enormous amount of good for underserved senior citizens,” the senator added.

Angara earlier sounded the alarm over the scarcity of geriatricians or medical doctors who are specially trained to evaluate and manage the unique health care needs and treatment preferences of older people.

As per the estimate of the Retirement and Healthcare Coalition, there are only 140 geriatric doctors operating in the country with no specialized geriatric nurses.

“Assuming that there are around 8 million senior citizens in the country, a geriatric doctor is tasked to cater to the varied and immediate needs of around 57,000 elderlies,” Angara said. “This means that if they wanted to attend to everyone, a doctor will have to see around 150 senior citizen patients for 365 days straight.”

Data from the Philippine Statistics Authority showed that the number of Filipino seniors is increasing rapidly, faster than growth in the total population.

According to Angara, senior citizens need care and support since they are more vulnerable to degenerative and communicable diseases due to the ageing of the body’s immune system.

He noted that the leading causes of morbidity among senior citizens were infections, while visual impairment, difficulty in walking, chewing, hearing, osteoporosis, arthritis and incontinence were their other common health-related problems.

Angara recently earned the endorsement of the Coalition of Services of the Elderly Inc. (COSE), an umbrella organization of 450 groups across the country dedicated to promoting the interest of senior citizens.

In endorsing Angara’s reelection bid, the COSE said that for many years, the senator has proven himself to be an “ally of the elderly” having produced meaningful measures for the benefit of millions of senior citizens.

As a legislator, Angara has been attentive and responsive to the needs of senior citizens by pushing for legislation that would promote their welfare such as the Expanded Senior Citizens Act of 2000, which included VAT exemption on particular goods and services and provided for a monthly stipend of P500 to all indigent senior citizens.

Angara inherited his advocacy for the elderly from his father, the late Senate President Edgardo Angara, who is responsible for the Senior Citizens Act of 1992, also known as the Angara Law.

The younger Angara has also been fighting for the proposed Expanded Social Pension Act, which seeks to not only double the amount but also widen the scope to cover those without any form of pension.

He also filed a bill that would put an end to any form of senior citizen abuse—whether physical, psychological, or even economical—by providing stiffer penalties and strengthening institutional support for elderly victims of abuse.

Angara: Pilot implementation of face-to-face classes needed before resumption nationwide
Immunization of the population expected to begin with the approval of the COVID-19 vaccination program bill-- Angara
Angara seeks exemption to donor’s tax for donations of COVID-19 vaccines and critical supplies
Angara: Growing number of out of school youth is a cause of concern
Angara: Ecommerce will help ensure the survival of MSMEs and boost economic growth
Angara bill seeks to assist LGUs in shifting to digital
2021 judiciary budget will ensure implementation of the Judges-at-Large Act and the judiciary marshal service – Angara
STATEMENT OF SEN SONNY ANGARA
ANGARA: PGH AND EAST AVENUE MEDICAL CENTER RECEIVE ADDITIONAL FUNDING UNDER THE 2021 GAA TO SERVE MORE FILIPINOS IN NEED OF MEDICAL ATTENTION
PCMC receives additional support under the 2021 GAA to provide even better services for children in need of medical attention-- Angara
Statement of Sen. Sonny Angara on the signing of the 2021 GAA
Christmas message of Sen. Sonny Angara
Angara: Displaced workers will continue to receive assistance under the 2021 budget
Improved internet services even in far flung areas expected with the increase in the budget for the National Broadband Program-- Angara
Angara-- New and unfunded laws will receive funding under the 2021 GAA
Improved health responses needed to boost consumer confidence and spur economic growth -- Angara
Angara wants more public hospitals and medical professionals to ensure all Filipinos are provided with quality health care
Angara wants public libraries to provide essential services to learners under the new normal
Statement of Sen. Sonny Angara on the transmittal of the 2021 GAB by the House of Representatives
Angara bats for the naturalization of Angelo Kouame
END_OF_DOCUMENT_TOKEN_TO_BE_REPLACED