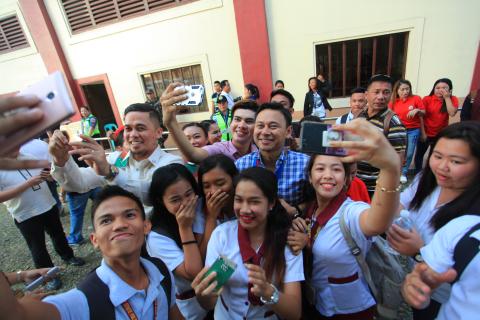 According to the Commission on Higher Education, tuition makes up a mere 30 to 40 percent of a family’s out-of-pocket expenses.

Among the regular expenses incurred by Filipino families for their children are transportation, food, medicine, school supplies and miscellaneous school fees.

As far as transportation is concerned, students will soon enjoy a 20 percent discount on fares for all modes of transport throughout the year with the signing into law of Republic Act 11314 or the Student Fare Discount Law, of which Angara was one of the authors.

For the other ‘basic services,’ Angara has filed Senate Bill 132 or the proposed Underprivileged Student’s Discount Act of 2019.

The bill calls for the grant of a five percent discount on basic and education services for underprivileged students, whether they are enrolled in public or private schools or non-degree technical-vocational courses.

These discounts would apply to food establishments across the country; medicines; textbooks and school supplies; tuition, miscellaneous and other school fees; and museums, theaters and cultural events.

For the establishments and schools that provide the discounts to the students, they are eligible to claim the cost as allowable tax deduction from the gross income in the computation of the income tax in accordance with the provisions of the National Internal Revenue Code of the Philippines.

Angara: Benefits for health workers to continue even after Bayanihan 2 expiration on June 30
EASTER SUNDAY MESSAGE OF SEN. SONNY ANGARA
Statement of Sen. Angara on the procurement of vaccines by the private sector
SK reform bill hurdles committee level-- Angara
Angara: Kouame an asset to Philippine basketball
Angara pushes for 100% increase in PDIC deposit insurance coverage
Angara: Pilot implementation of face-to-face classes needed before resumption nationwide
Immunization of the population expected to begin with the approval of the COVID-19 vaccination program bill-- Angara
Angara seeks exemption to donor’s tax for donations of COVID-19 vaccines and critical supplies
Angara: Growing number of out of school youth is a cause of concern
Angara: Ecommerce will help ensure the survival of MSMEs and boost economic growth
Angara bill seeks to assist LGUs in shifting to digital
2021 judiciary budget will ensure implementation of the Judges-at-Large Act and the judiciary marshal service – Angara
STATEMENT OF SEN SONNY ANGARA
ANGARA: PGH AND EAST AVENUE MEDICAL CENTER RECEIVE ADDITIONAL FUNDING UNDER THE 2021 GAA TO SERVE MORE FILIPINOS IN NEED OF MEDICAL ATTENTION
PCMC receives additional support under the 2021 GAA to provide even better services for children in need of medical attention-- Angara
Statement of Sen. Sonny Angara on the signing of the 2021 GAA
Christmas message of Sen. Sonny Angara
Angara: Displaced workers will continue to receive assistance under the 2021 budget
Improved internet services even in far flung areas expected with the increase in the budget for the National Broadband Program-- Angara
END_OF_DOCUMENT_TOKEN_TO_BE_REPLACED